Bill Godfrey is one of our long-standing garden hosts here at Didsbury Open Gardens. A true plantsman and passionate about gardens, plants and much more besides.  Bill has been sharing photos, stories and knowledge about a special plant each week. Here is a recent post to enjoy.

This week’s choice is the inflorescence of the ‘Handkerchief Tree’.

There’s nothing naughty or immoral about a gardener’s ‘must have’ list. It’s not a deadly sin like envy, lust, greed or pride even. But given the space or opportunity in the garden, every gardener will have a ‘must have’ to fill it. Not all planting decisions are the right ones. Herbaceous plants can be easily moved or substitutes found, trees on the other hand need a long term view and a wrong decision is not so easily remedied.  The jury is still out in the case of my Davidia.

Two things co-joined to ensure the Davidia involucata was top of my ‘must have’ list. We were with one of our Garden Tour groups in Tatton Park garden under one of the finest examples in the country and we were riveted by Michaeljon Ashworth’s story of its discovery. Over to MJ …

“The late nineteenth century saw much European exploration in China.  Access was grudgingly granted to the fading Empire and such were the riches of nature in remote Xanadu every missionary and merchant saved and sold skins and seeds as well as souls.

In 1874, Père David, Catholic missionary, zoologist and botanist, returned to Paris with a (just about) live giant panda and 250 new species of plants.  Among the plants was a tree that blossomed pocket handkerchiefs or Matisse/Picasso doves. This tree was pursued by the Cotswold born Ernest Wilson who learned his trade at a nursery in Solihull and the sobriquet “Chinese Wilson” when he was headhunted by Kew to plant hunt in China.  Wilson was well equipped for this mission.  Healthy and fit, he was a born diplomat who listened to local advice and had a good eye for what would make a good garden plant.

Arriving in Hong Kong via the USA, Wilson found himself locked down in an outbreak of Bubonic plague.  His aim was to meet up with Augustine Henry, a Scottish medical officer in Yunnan, who had taken up plant hunting as a hobby and named 500 new species.  Wilson finally met him as he was about to leave for home in 1899.  His parting gift to Wilson was a scruffy piece of paper (an ersatz map covering 20,000sq miles), with a large X indicating Henry’s location for the fabled white-braced Davidia.

Wilson planned an expedition in search of the marked tree. In 1900 anti- European feeling was strong in China. Pursuing his goal after deciphering the map as well as being pursued by insurgents, Wilson found the X of his treasure map – by now reduced to a hefty stump beside a house supporting beams and posts of Davidia timber!

After 13,000 miles Wilson had arrived and failed. However, by pure chance, his return journey found him a month later in a Yangtze gorge gathering seeds from the only Davidia he ever came across in China. He described it as the most interesting and beautiful of trees growing in northern temperate regions.

It took 11 years for those seeds to produce adult trees bedecked with white bracts. Wilson’s star was ascendant as, leaving the seeds with Veitch’s nursery, he set off on his second expedition, newly wed to his sweetheart Nellie.  Cornus, Acers and Meconopsis fell into his collector’s hands. Treasures indeed. His later life was spent working out of Boston for the Arnold Arboretum until he and Nellie died in a motor accident in 1930.”

Our Moor Cottage tree was planted as a sapling in 2003 close to the north boundary wall of the spring garden (on the left beyond the Ceanothus and Sambucus nigra in the attached photo). We had fourteen years before the first hanky appeared. You can imagine our delight as more annual flowerings followed to justify our long wait. 2020 wasn’t such a good year for hankies; perhaps because so many seed balls were left hanging from the tree after the mild winter.

If you are close to Tatton and we are permitted to visit the garden, don’t miss its most glorious sight – the two, white dove-bedecked trees to the left of the long drive past the last Baron Egerton’s nostalgic rondarwel. You’ll understand why I just had to find space for one.  Whether it will outgrow the space available or be belittled by imprudent pruning, remains to be seen. Not in my life-time however! 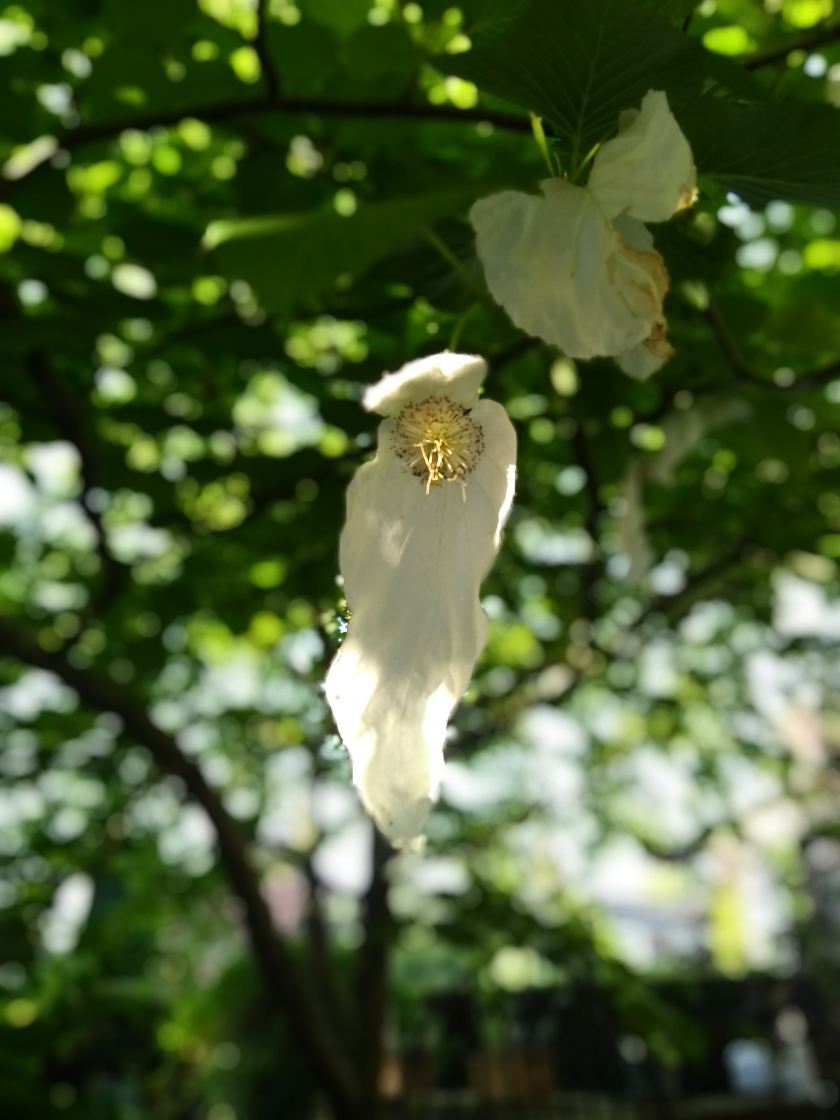